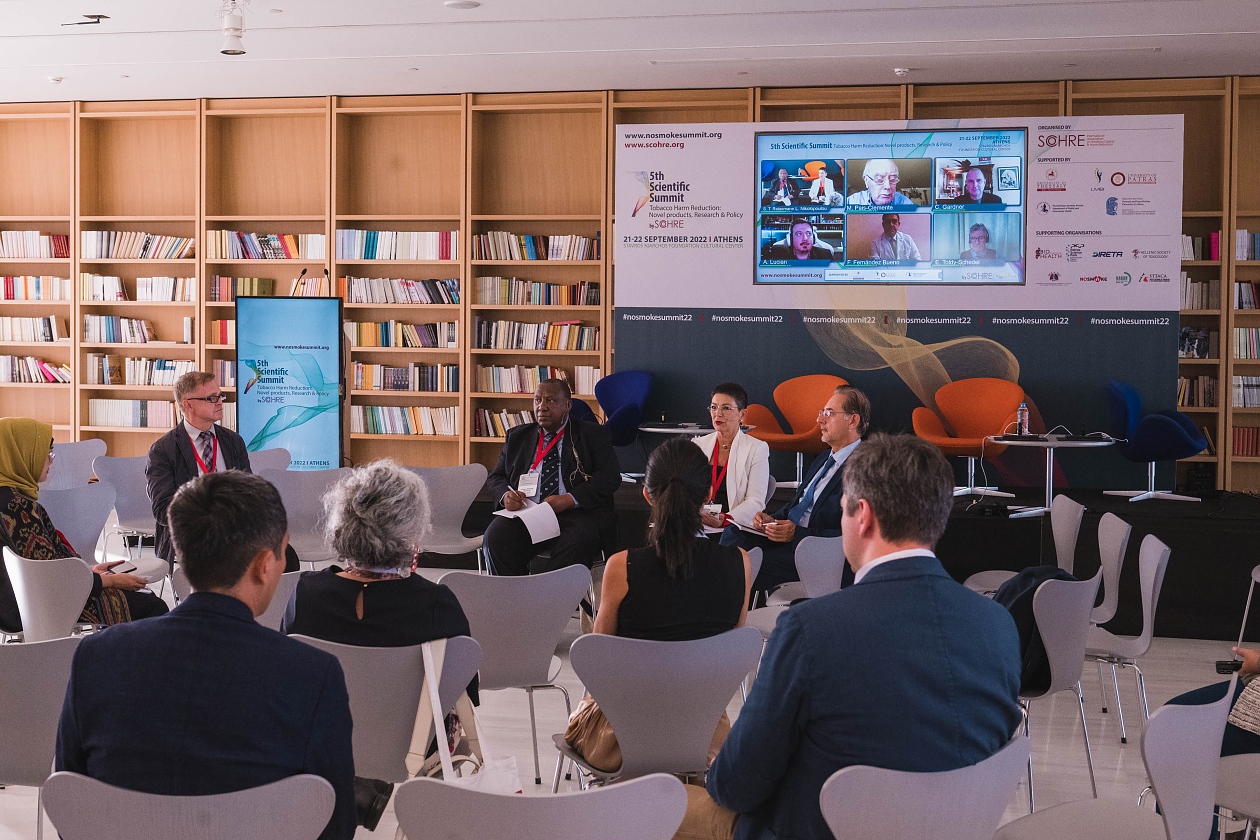 The 5th Scientific Summit for the second day had a full programme that included two keynote speeches, four panel discussions and the final research track sessions.

As first highlight from day 2, Lion Shahab’s keynote speech on “How can we encourage and establish Harm Reduction while protecting youth from adopting the use of nicotine?” analysed the fear that available alternative to cigarettes new products can become quite popular among youth and non-smokers, increasing addiction to nicotine. After presenting data on nicotine vaping products use by youth, he concluded stating that there is clear evidence that e-cigarettes (but also snus and other reduced harm products) are beneficial for existing smokers with little evidence of gateway effects. Of course, to engage smokers and youth correctly, we need accurate information/legislation, favoring e-cigarettes over cigarettes, while reducing lifestyle appeal.

The open panel discussion “THR challenges & prospect: From scientific evidence to people’s needs satisfaction” among THR organisations representatives was this Summit’s culmination. The discussion coordinated Lina Nikolopoulou (SCOHRE Director, Greece) and Solomon T. Rataemane (THR Expert, South Africa), rapporteur, during which they shared experiences, good practices and ideas and tried to explore how they can create more opportunities for education of health policy experts, regulators, and the public, and advocate for new research to generate more data, and for evidence-based policies.

European Medical Association-EMA’s most important philosophy is synopsized in the following statement: “better informed doctors make better-treated patients”, Dr. Manuel Pais-Clemente (EMA representative, Portugal) said. Consumers, politicians and regulators should be informed about the developments and technology innovations of smoking, in order to take the most correct decisions, legal measures and policy recommendations.

Tom Gleeson (European Tobacco Harm Reduction Advocates – ETHRA, Ireland) highlighted that it is extremely important to evaluate THR products compared to combustible cigarettes. A main challenge today, he added, is to generate sufficient and strong data in order to inform accurately consumers, doctors, regulatory authorities and politicians about all products and their comparative risks.

Today, there are safer alternatives to traditional tobacco cigarettes, and it is “negligent homicide” not to be recommended to people who need them, he emphasized.

Emil Toldy-Schedel (Hungarian Scientific Association for Harm Reduction and Environmental Diseases, Hungary) commented that informing society about Harm Reduction is truly a matter of high importance and proposed that campaigns should be conducted in every country.

Actions on THR require a balanced approach, Fernando Fernández Bueno (Platform for the Reduction of Harm due to Tobacco Consumption, Spain) said. Unfortunately, he continued, in Spain, traditional cigarettes and THR products are considered the same, the current government refuse to dialogue with stakeholders, and doctors and scientists who defend THR are actually suffering harassment and coercion by the authorities. This must change: the public and the doctors must be provided with accurate information about the actual differences between the products.

In Indonesia, smoking is extremely prevalent, since approximately 65 million of the population are smokers, Amaliya Amaliya (Indonesian Tar Free Coalition - KABAR, Indonesia) said. In order to reduce smoking prevalence in the country, it is necessary to provide to the people accurate education and information on the dangers of smoking and the different risks of cigarettes and alternative tobacco products, and to support the THR concept and its implementation in Indonesia. Unfortunately, the country has adopted WHO’s agenda which is very dogmatic· THR products don’t have zero risk, she said, but significantly lower risk can save lives.

Describing the situation in Brazil, Alexandro Lucian (DIRETA, Brazil) commented that vaping, despite the fact that -although not safe- is evidently less harmful than the traditional combustible cigarettes, is considered more dangerous in his country, because of the misinformation, disinformation and lack of regulation.

Subsequently, Fares Mili (Tunisian Society of Tobaccology and Addictive Behaviors – STTACA, Tunisia) presented the main objectives, activities and achievements of STTACA; a major success has been that the Society recently succeeded regulation of novel THR products in Tunisia.

All new products must be properly evaluated and regulated, Ignatios Ikonomidis (President of SCOHRE – International Association on Smoking Control & Harm Reduction, Greece) commented, but you cannot compare the novel THR products with fresh air· they should be compared with cigarettes. Doctors should be well educated and informed about all cessation methods, including HR, he added, to be able to inform their patients correctly.

Summarizing the results of the discussion, Solomon T. Rataemane said that there is need for more research, increased communication of available data and information, as well as educational programs to medical and other schools. Science communication should be improved for all stakeholders, he explained, and governments should understand that THR interventions improve public health.

We must all unite forces to advocate for THR, Lina Nikolopoulou added, we have to persuade politicians and regulators by informing them about the evidence step by step. Although there is mounting scientific evidence that innovative tobacco products are less harmful, invariably the argument used by government authorities is that the data are not yet adequate. However, there are obstacles to conduct research to build further the evidence. This is against the principles and values of scientific ethics, she underlined. SCOHRE advocates for more data to be generated and for further discussion, she said, and invited the members to participate in the drafting of an advocacy statement as conclusion of this Summit.